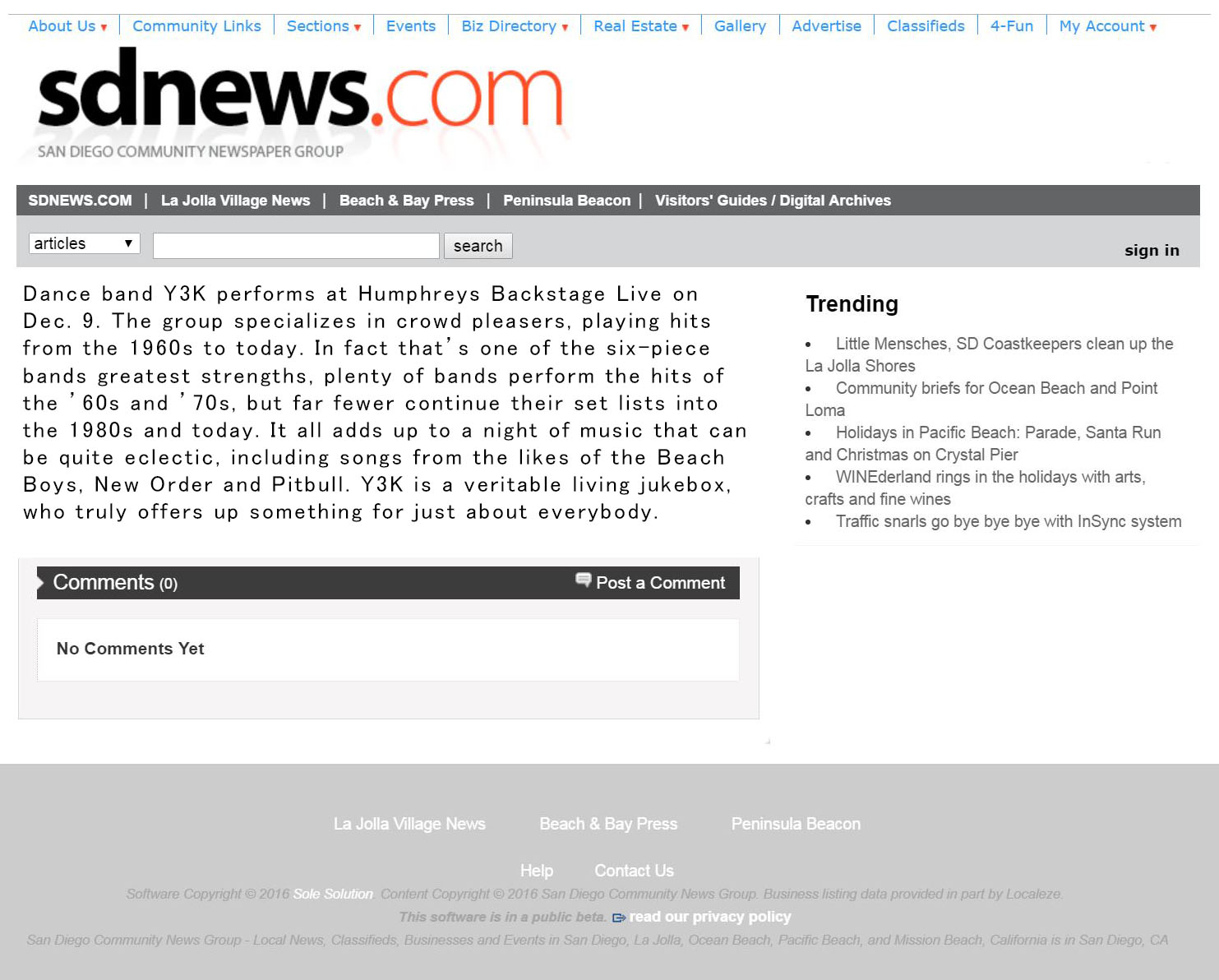 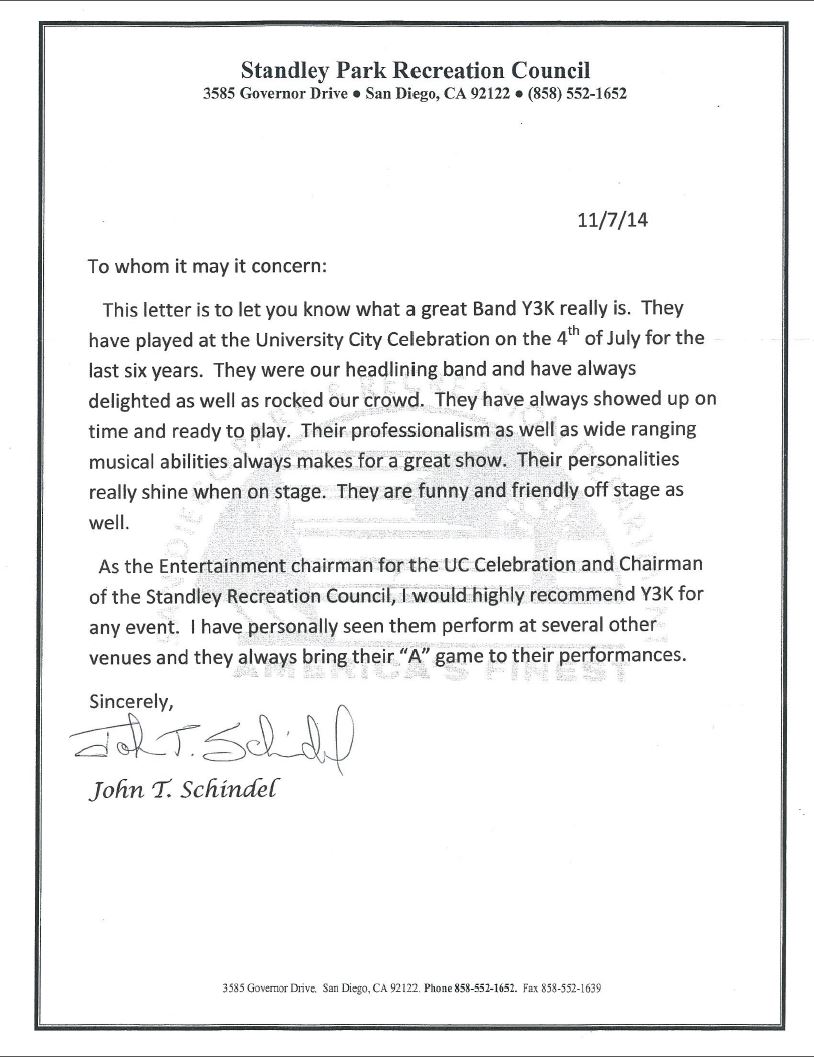 "Thank you! Thank you! You guys were awesome. My feet are still sooo
sore. I love dancin' to your music!! I'll have to keep an eye on you guys so I can
come dance some more. Thanks for an unforgettable time. Loved every minute of it!"
Megan L. (wedding)

"Y3K performed at the City of Encinitas Summer Concerts by the Sea.  Y3K entertained the audience who had an age range from infant to senior.  Y3K kept their energy level up the whole time during their performance.  The crowd was truly entertained.  All members of the band were real professionals and were great to work with.  Thanks for the great performance!"
Mike Pacheco (City of Encinitas Recreation Supervisor, Encinitas Concerts In the Park) 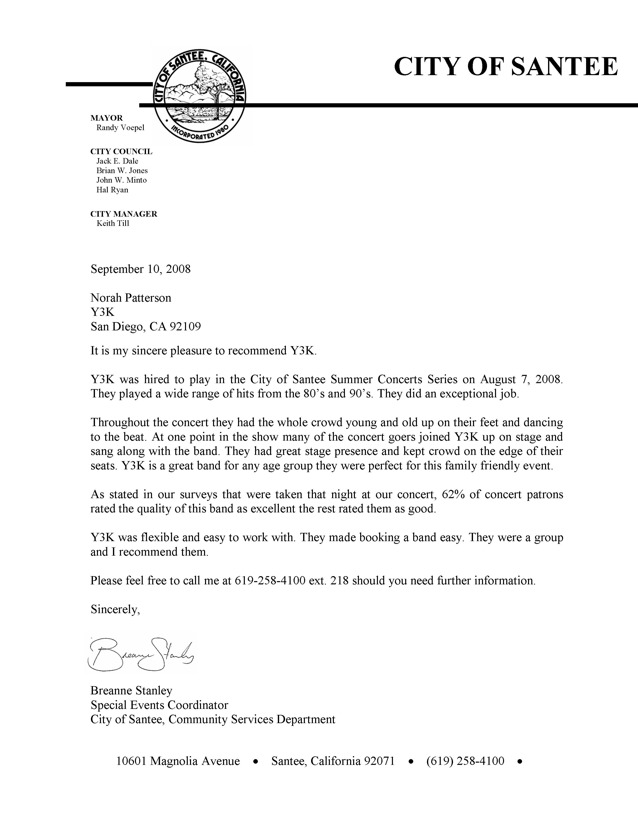 "Thanks so much for being there!  Your efforts were much appreciated.  Hope to see you next year!" (San Diego Marathon, Y3K headliner band)

"I have hired Y3K four times during the past 18 months for private parties.  Our guests consistently tell us how impressed they are with the band’s presentation of its music.  From Y3K’s first song, the dance floor is packed until the end of the evening.  To appreciate the band, you must see the group on stage and in action.   Simply stated, these guys rock!!  Also, based on my experience with other local groups, they are the nicest, most personable, down-to-earth musicians in San Diego."  (Michael Wright, attorney.  Various private parties) 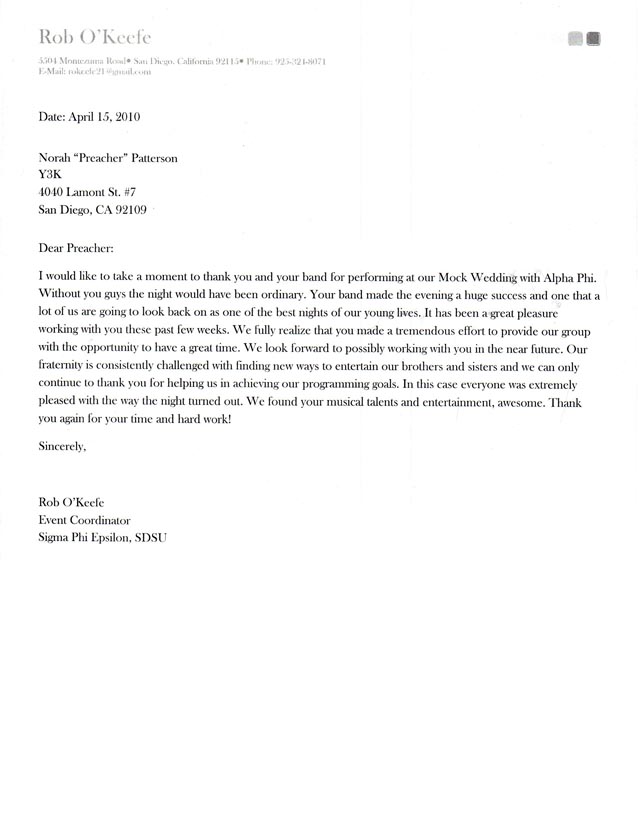 Hi Preacher! We wanted to thank you for giving us the laminated song list at the wedding - it will definitely be going into our wedding scrapbook and is a true keepsake! Thank You also for helping to make our wedding very fun and very memorable - all of our family and friends were raving about how great you guys are. More than happy to recommend you to our many other friends who will be getting married in the next few years.  (N&M, April 16, 2011 wedding)

"The hot dance band Y3K plays everything from Foofighters to Depeche Mode..."